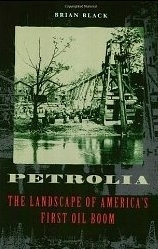 In Petrolia, Brian Black offers a geographical and social history of a region that was not only the site of America's first oil boom but was also the world's largest oil producer between 1859 and 1873. Against the background of the growing demand for petroleum throughout and immediately following the Civil War, Black describes Oil Creek Valley's descent into environmental hell. Known as "Petrolia," the region charged the popular imagination with its nearly overnight transition from agriculture to industry. But so unrestrained were these early efforts at oil drilling, Black writes, that "the landscape came to be viewed only as an instrument out of which one could extract crude." In a very short time, Petrolia was a ruined place--environmentally, economically, and to some extent even culturally. Black gives historical detail and analysis to account for this transformation.