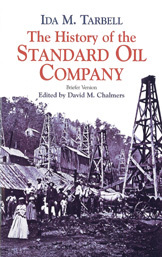 This Dover edition, first published in 2003, is an unabridged republication of the Briefer Version of the work edited by David M. Chalmers, and published in 1966 as a Harper Torch book by Harper & Row, Publishers, New York.  For this edition, the text was cut approximately in half and the appendices eliminated.  The complete work originally appeared as a series of articles in McClure's Magazine from 1902 to 1904 and was published in book form, in two volumes, by The Macmillan Company in 1904.